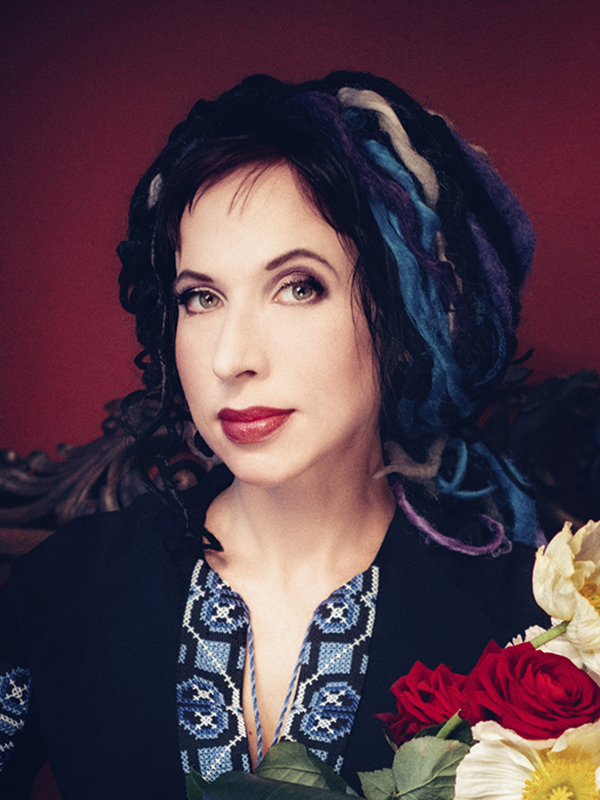 One of the most awarded literary authors in Scandinavia and translated into 46 languages and sold in more than 2 million copies, Finnish-Estonian novelist and playwright Sofi Oksanen (b. 1977) is an icon of her field. Called a “literary phenomenon” by The Times, Oksanen has since her international breakthrough novel, Purge, proved time and again that she is a mistress of human drama, incorporating historical and contemporary issues that move the reader. The Dog Park is Oksanen’s sixth novel.

Sofi Oksanen is one of sixteen authors entrusted with the role of literary godparent to Finnish political decision-makers. Sanasto, an organization dedicated to copyright issues in literature, has launched a program where they connect authors and decision-makers in order to create a link between literature and politics. The authors entrusted with this mission will uphold a conversation about literature, the book industry and copyright matters.

The opera Innocence, with the libretto written by Sofi Oksanen, has been nominated for the Cultural Achievement of the Year in Finland. Innocence is also nominated in the category International Achievement.

Voting for Cultural Achievement of the Year will continue through November 9th, and the winners will be announced at the Culture Gala in Tammerfors on November 25th. 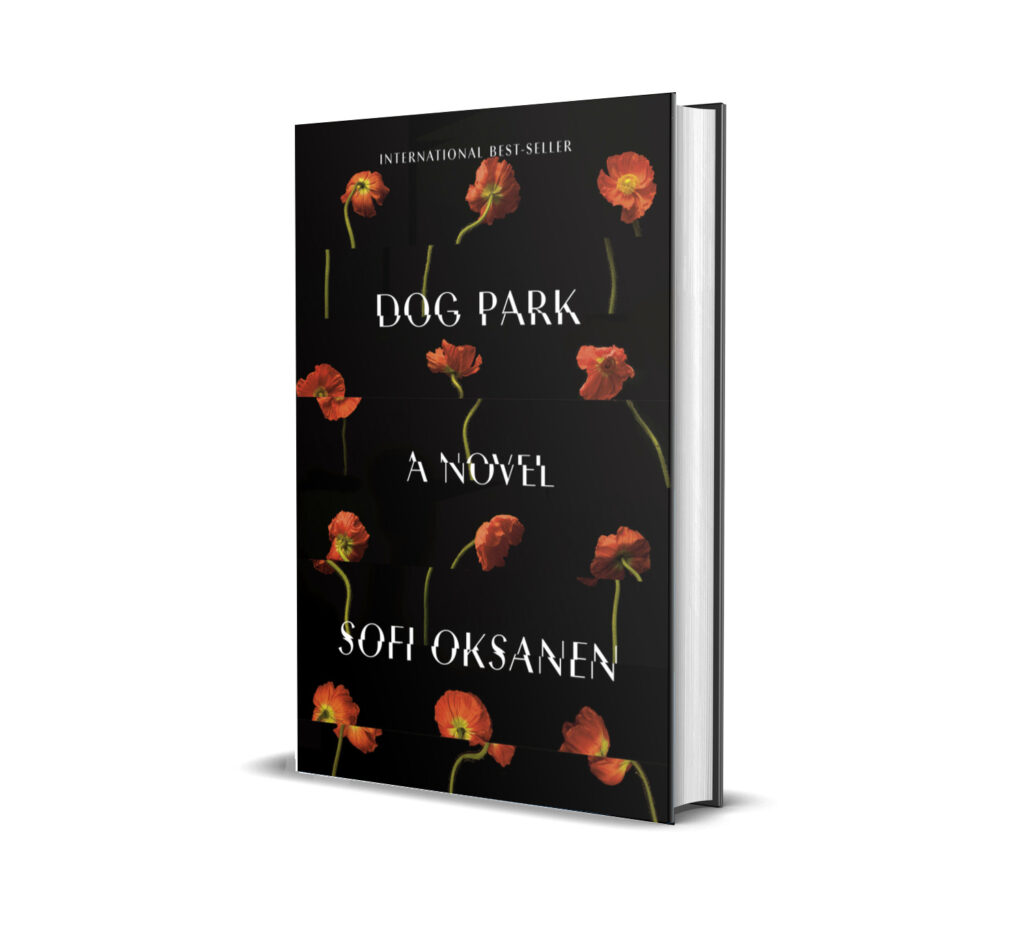 As Oprah Winfrey lists her picks for the 21 Best Translated Books of 2021, Sofi Oksanen’s Dog Park is featured on the list.

Last week, the opera entitled Innocence, composed by Kaija Saariaho and with the libretto written by Sofi Oksanen, had its world premiere during the 2021 Festival d’Aix-en-Provence. Both the opera in its entirety and the libretto itself have been praised by critics and audiences worldwide.

Already prior to the premiere, The New York Times newspaper called Innocence “the most anticipated new opera of the year,” and it has since been declared as “the landmark opera of our time” by Helsingin Sanomat, the largest daily newspaper in the Nordics. “In operas, the composer is often mentioned, the librettist less often. But Kaija Saariaho’s and Sofi Oksanen’s Innocence is the work of two equal masters,” the review continues.

“From the libretto to the staging, everything in this dark and powerful work promises a future in the biggest international theaters,” French financial newspaper Les Echos writes. The newspaper Le Monde calls it “an overwhelming masterpiece” and Spanish El Pais affirms that “it leaves no one unimpressed.” 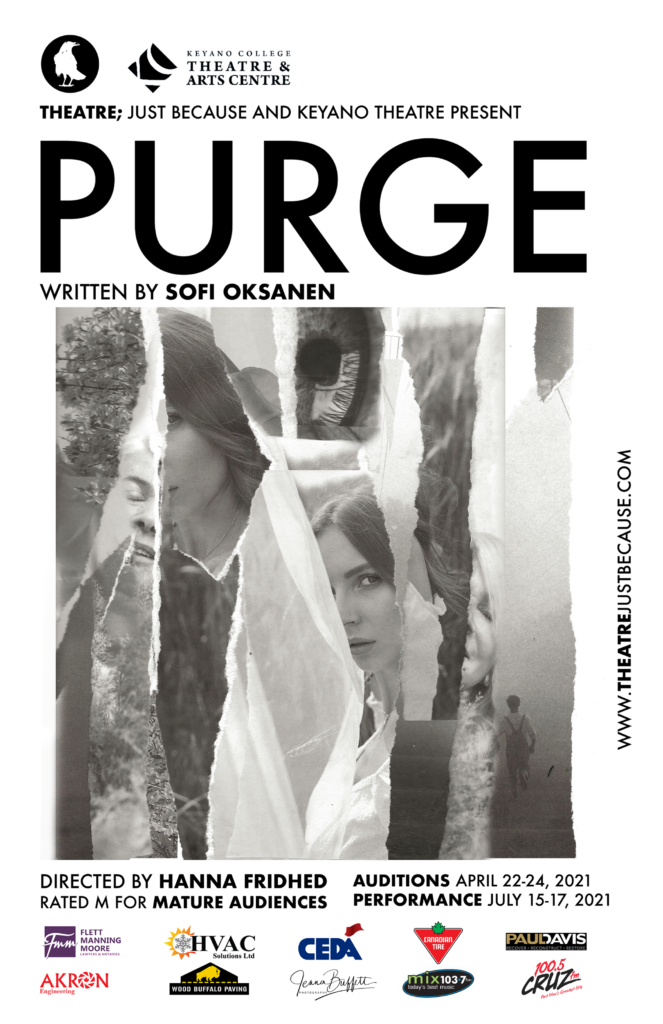 The Canadian theatre company Theatre; Just Because has adapted Sofi Oksanen’s bestselling novel Purge into a stage play. Purge is a riveting and suspenseful tale of two women dogged by their own shameful pasts. Set in the years following WW2 and in the early 1990s, the play depicts the culmination of a tragic family drama of rivalry, lust, and loss that played out during the worst years of Estonia’s Soviet occupation.

Purge is set to premiere on July 15, with live performances continuing until July 17 and virtual performances until July 25. Click the ‘Read more’ button below to access tickets which are available for the live-audience performances in Alberta, Canada, and for worldwide streaming online.

Today it was announced that production company Tuffi Films has acquired the rights to adapt Sofi Oksanen’s bestselling debut novel Stalin’s Cows into a TV series.

The six-episode series will be written by Finnish scriptwriter Aino Kivi and Estonian scriptwriter Andra Teede, who give their thoughts on the novel and project below:

“The novel is remarkable, and it feels even more topical now than it did when it was first published.”
–Aino Kivi

“Stalin’s Cows will be the most important international television series ever filmed about the complicated history of Estonia. Sofi Oksanen has done an amazing job of writing in one book about the troubling times of the Stalin repressions of the 1940s, the joyless life of the deep Soviet Union of the 1970s and the ramifications of all this in the lives of the young Estonians in Finland in the 2000s. Today, when Estonian and Finnish relations are more tense than they have been for a while, it is important to remember the history of the neighbouring countries and the freedom and prosperity that Finland has always represented to Estonians. Stalin’s Cows is a story of how some suffering play a role in our psyche even generations later. I am very proud to be a part of writing this series and hope to bring my own family’s stories into this very promising work of art.”
–Andra Teede

And Sofi adds:
“When I saw Aino Kivi’s dramatization of Stalin’s Cows at the Joensuu City Theatre, I was astounded by Kivi’s talent, I am thrilled that she is now working on a TV series version of my novel.”
–Sofi Oksanen

Premiere date and territories where the TV series will be released are yet to be announced.

‘Purge’ chosen as one of the 21st century’s best books

The editorial team at Svenska Dagbladet – a leading daily newspaper in Sweden – has handpicked a list of the “Best Books of the 21st Century.” No. 4 on the list is Sofi Oksanen’s award-winning and internationally bestselling novel Purge, with the motivation as follows:

“In Purge, Finnish-Estonian Sofi Oksanen depicts the population in Estonia and its fate during the 20th century, with parallels being drawn to contemporary Estonians’ lives. Through two women’s differences and similarities, the reader gets to experience up close what the will to survive can do to a human being. The occupation of land and body is a strong theme in the novel, which has achieved great success both in the Nordics and in the US. Purge was also awarded the Nordic Council Literature Prize, and has become a radio serial, film and theater.”

Innocence is a large-scale symphonic opera with an international wide-ranging cast, composed by Kaija Saariaho and libretto written by Sofi Oksanen. It is scheduled to have its world premiere at the 2021 Festival d’Aix-en-Provence in July.

Although the premiere still lies ahead, the opera has already been shortlisted for the prestigious 2021 Fedora Opera Prize.

The Fedora Opera Prize is awarded by Fedora – a European platform that supports innovation in opera and ballet – and is bestowed on promising artists and teams of co-producing cultural institutions who collaborate on the creation of new opera or ballet productions to reach out to new and wider audiences. This prize celebrates new talents and ideas in opera and ballet that will shape the future of these art forms.

Sofi Oksanen has been awarded a Medal of Honor by The Ukrainian Association in Finland for her promotion of Ukrainian culture in Finland and for drawing attention to Ukraine in Europe and the world.

Sofi Oksanen’s latest novel, The Dog Park, is set both in Finland and in Ukraine. The novel – currently sold to 22 countries – highlights the cruelty of the infertility business and takes a stand for women’s rights to their own bodies. 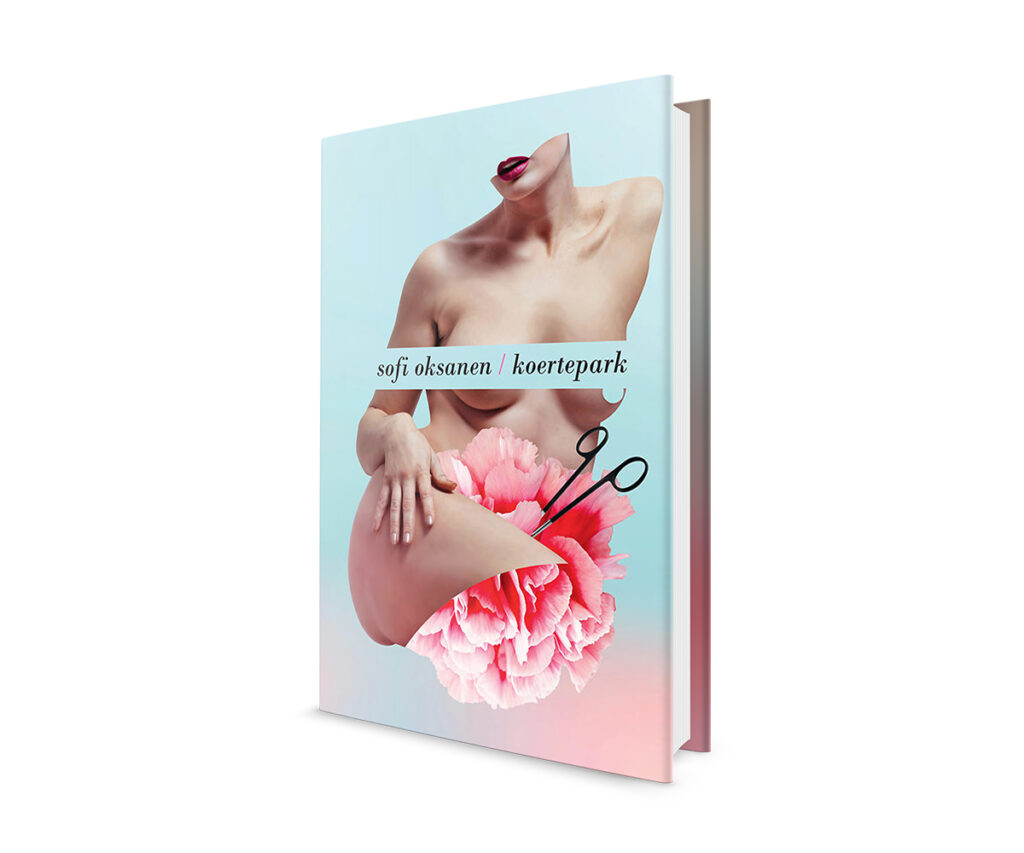 Sofi Oksanen’s The Dog Park is currently No. 1 in Estonia. 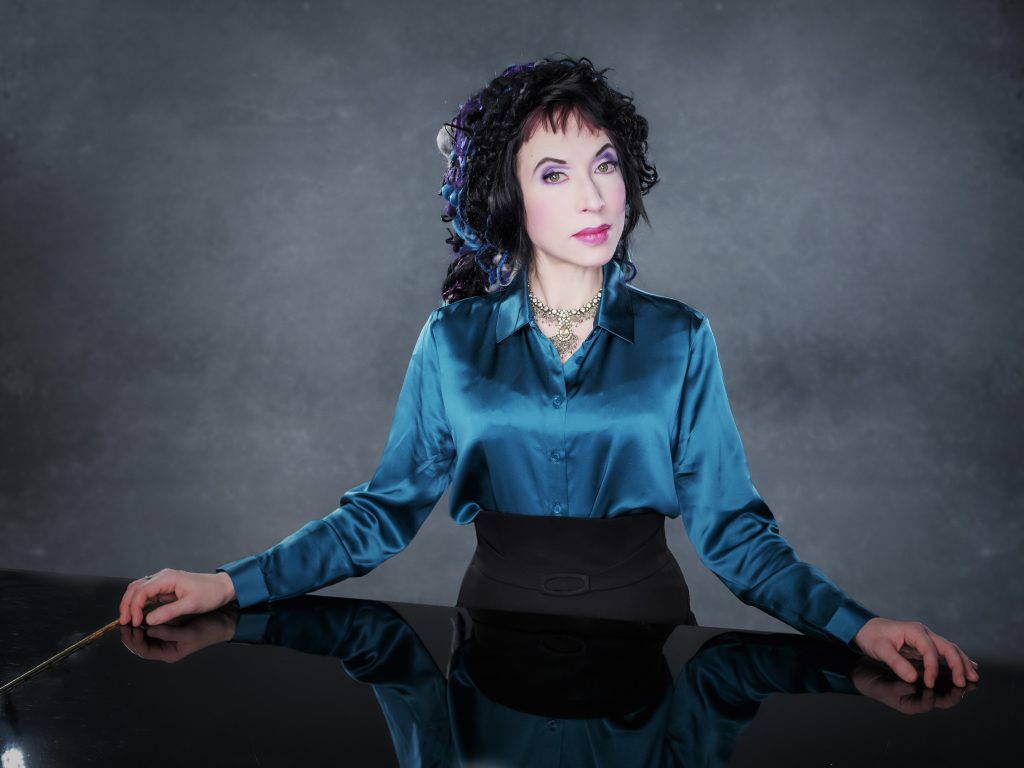 ‘When the Doves Disappeared’ acquired by SF Studios

This weekend, SF Studios announced that it will be the Nordic distributor of the upcoming film adaption of Sofi Oksanen's bestselling novel When the Doves Disappeared. Cinematic Inc. will produce the feature, with Antti J. Jokinen attached to direct.

When the Doves Disappeared is a story of occupation, resistance, and collaboration in Estonia during and after World War II, when the boundaries and power structures of Europe changed dramatically. Oksanen’s novel traces these changes as seen through the eyes and lives of one Estonian family.

Click the "Read more" button below to read the full article in Variety magazine. 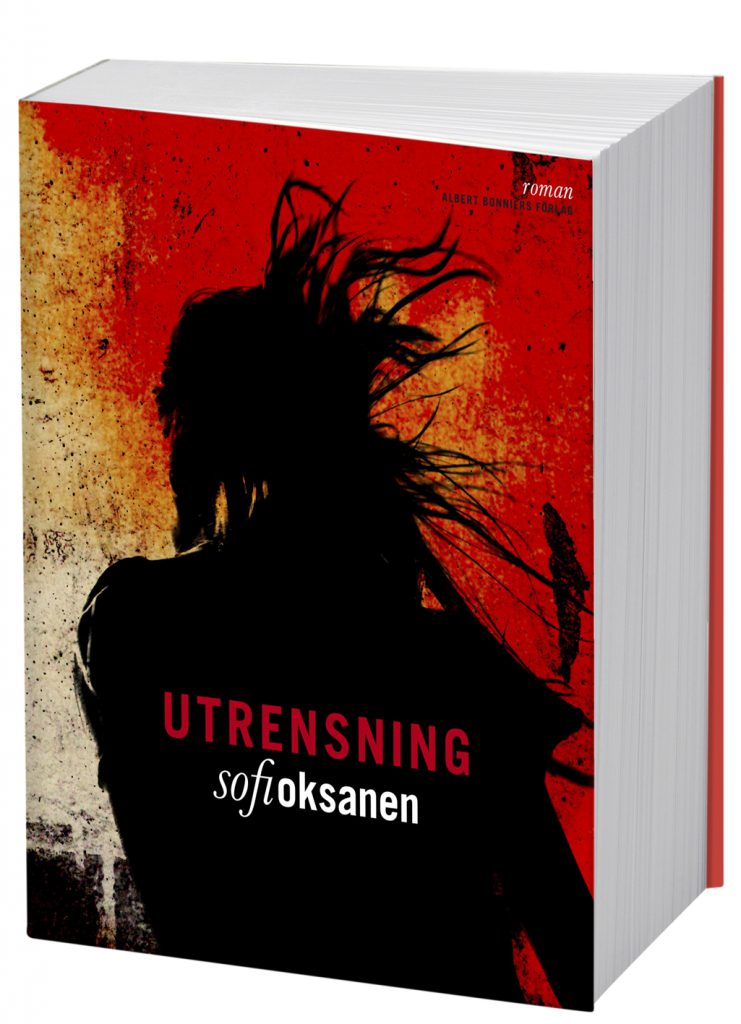 ‘Purge’ listed among the 10 best books of the decade

The prestigious Swedish literature magazine Vi Läser has announced the best translated fiction of the decade. Among the 10 listed novels is Sofi Oksanen’s Purge, which is described as a modern masterpiece.

Click “Read more” below to find the article in Swedish.